This article was last updated on December 7, 2020.

Self-defense insurance plans can be an absolute lifesaver if you ever find yourself in the unfortunate situation of having to defend yourself with a firearm or other weapon.

So, I’ve been researching the plans out there and wanted to address something that I believe needs to be addressed. Today, I’m going to talk about the top three legal defense plan providers: U.S. Law Shield, CCW Safe, and the USCCA.

I’m going to approach this comparison in a bit of an unorthodox way. Most comparisons go into the fine details of the coverage limits, the cost, etc. I’m not going to bother doing all of that. Why? Because, in my opinion, two of the three big players have a single exclusion that is so egregious the plans shouldn’t even be considered.

Allow me to introduce my Legal Defense Plan Wall of Shame, where legal defense companies go that have such drastic exclusions in their coverage that they should be ashamed of themselves.

The Wall of Shame

I won’t go so far as to say these companies engage in false advertising since everything is technically outlined in their fine print. But think of them as having a click-bait news headline that says one thing and the actual article says something just a bit different.

In 2018, the most recent data available at the time of this writing, nearly 1 in 5 murders was committed by a family member, a domestic partner, or a dating partner. The two organizations on my Wall of Shame will feed you to the wolves if you have to defend yourself in these types of situations.

First up to earn a spot on my Wall of Shame is U.S. Law Shield.

U.S. Law Shield is one of the most popular legal defense organizations in existence. They are even endorsed by Florida Carry, a non-profit, non-partisan, grassroots organization dedicated to advancing Floridians’ right to keep and bear arms for self-defense. In exchange for its endorsement, Florida Carry members receive a pretty decent discount on their U.S. Law Shield membership.

The major problem with U.S. Law Shield lies in their “Family Violence Exclusion.” In my opinion, it is an automatic disqualifier and a very good reason to choose someone else for your legal defense needs.

“Family Violence Exclusion. This Legal Service Contract specifically excludes providing Member with legal representation from an Independent Program Attorney for any incident, criminal investigation, or prosecution involving a firearm or other lawful weapon against a Member’s current or former family member, household or dating relationship as defined in applicable state law.”

So if you are forced to defend yourself against a crazed stalker of an ex-husband (or ex-wife), you’re going to be hung out to dry? The people you are relying on to legally defend you are going to turn their backs and say, “Sorry, but as outlined in the membership agreement, we don’t cover that. Best of luck to you.” Are you kidding me right now?!?

UPDATE: Apparently I’m not the only one who’s picked up on this unacceptable exclusion because, on June 17, 2020, U.S. Law Shield sent a letter to its members seemingly backpedaling their own contract terms. In the letter they claim, “Any Member who uses a firearm or other legal weapon in justified self-defense or defense of another is eligible for coverage, regardless of the specific charges they face, including charges alleging domestic violence.”

The problem with this is the actual contract says something completely different and the contract is going to have the final say, not some damage-control letter they sent out because they got called out. 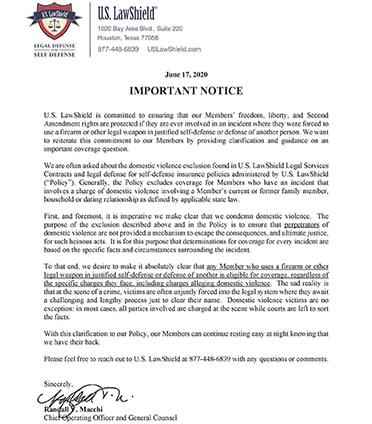 This seems to double down on the problem I have with U.S. Law Shield because their membership contract says one thing, and then they send out a letter that says something completely different. If U.S. Law Shield truly feels the way their letter presents, then they need to update the actual contract language. As of right now their contract and their letter say two completely different things, and I would not rely on a letter to supersede a formal membership agreement. As if that wasn’t bad enough, I posted about this conflict in the Florida Carry Facebook group (since they heavily endorse them), and the discussion post mysteriously disappeared.

The next organization to earn a spot on my Wall of Shame is CCW Safe.

CCW Safe is another heavy hitter in the legal defense arena. Jon Gutmacher, author of the top Florida and Federal gun law book in the nation (which is a fantastic book by the way), endorses CCW Safe as his legal defense plan of choice.

My problem with them is, just as with U.S. Law Shield, CCW Safe does not cover domestic self-defense incidents.

“DOMESTIC RELATIONSHIPS: CCW Safe will not provide the services for any domestic violence incident, criminal investigation, or prosecution arising from a use of force incident involving you and a current or former member of the household, including, but not limited to, a spouse, former spouse, adult or minor child, or involving those in a current or former dating relationship as defined in applicable state law.”

I feel like I’m beating a dead horse, but I’m absolutely floored. People rely on these folks, and even pay them a good bit of money, to stand by their side when things go bad, and they give themselves an out so they don’t have to help. It literally blows my mind.

How many times have we heard of someone being attacked or murdered by a crazed ex-spouse or ex-significant other? If you have a stalker who you were once in a relationship with, CCW Safe WILL NOT cover you in a self-defense incident against that person.

I’d be willing to bet most of their members have never read the actual membership agreement, and simply decided which company to go with based off of a comparison chart they found online, or perhaps a high-pressure affiliate who sold them the plan. Some people are going to be sorely disappointed to learn they will be hung out to dry by the people they thought had their back. But I won’t be one of them.

In steps the United States Concealed Carry Association. Of the three big players, they are the only one that does not have an exclusion for domestic, family, or dating violence.

I read through the entirety of the USCCA Membership Agreement and nowhere in the terms, nor in the self-defense insurance policy, does it even mention domestic or family violence. If you don’t want to read through the entire pamphlet, you can search (Ctrl + F) the PDF document for “domestic,” “family violence,” or other related terms. The word “family” doesn’t even appear in the agreement, and the only time “spouse” is mentioned is in reference to the discount offered to your spouse if you become a member.

There are advantages and disadvantages to each self-defense plan out there. None of them are perfect and they all have exclusions of some sort. But to exclude coverage for defending yourself against a family member or a domestic/dating partner is absolutely unacceptable in my book.

For this reason, I have to recommend USCCA’s self-defense liability insurance as my plan of choice.

Only you can decide which plan is right for your specific situation, but I wanted to take the time to show you this very significant loophole that some of the organizations may exploit to avoid helping you navigate the aftermath of a critical self-defense incident.